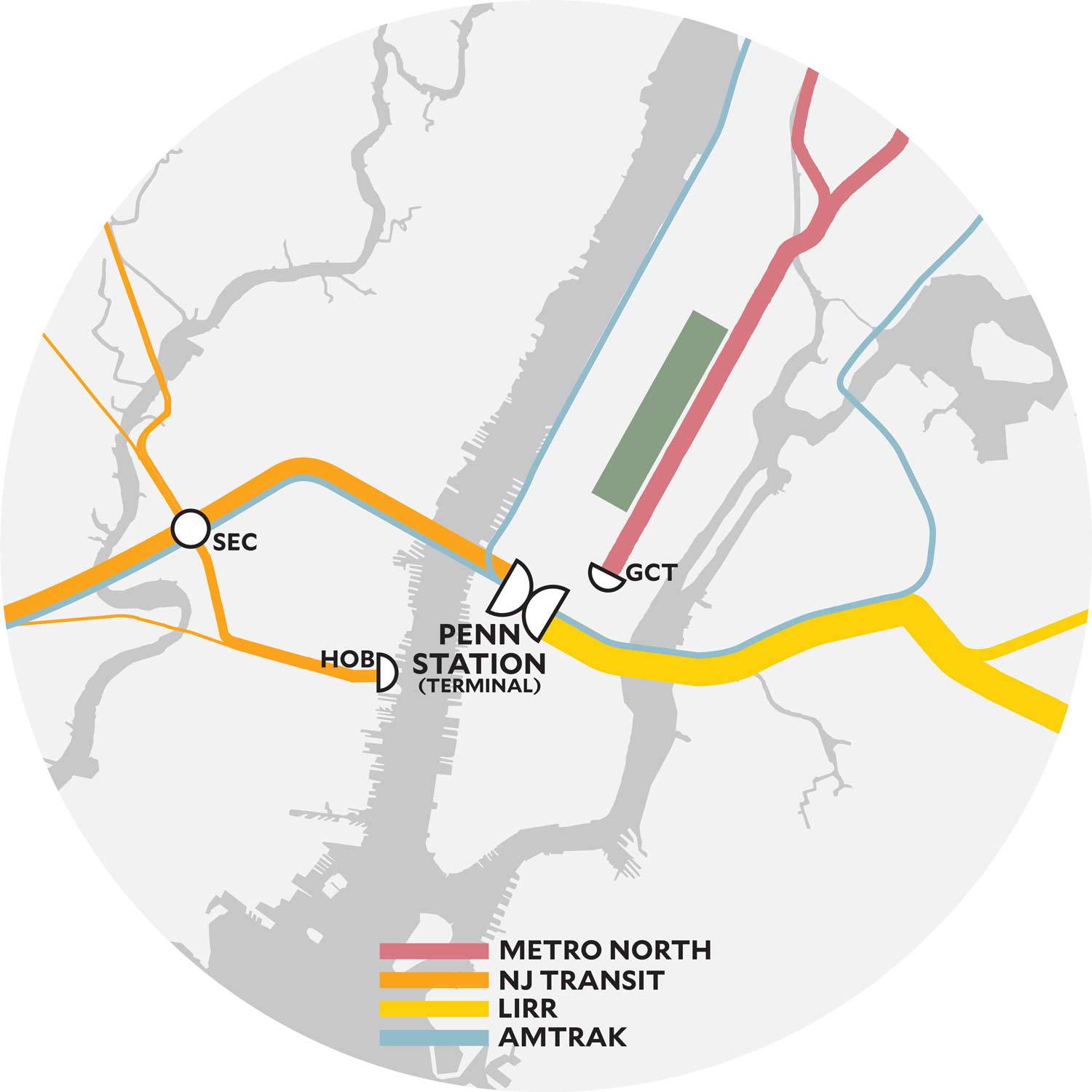 We can build a world-class regional transportation network by fixing the way Penn Station is currently operated.

Today, Long Island Rail Road and New Jersey Transit commuter trains dead-end at Penn Station. Operating Penn Station as an inefficient terminal rather than a through station is at the heart of our regional transportation challenges.

Implementing through-running service at Penn Station can create a more pleasant experience for travelers, increase train capacity in and out of the station, and provide connections to more destinations.

WHAT IS “THROUGH-RUNNING”? GO TO:

1963~1968 - Following the decline in rail passenger volume, PRR sells air rights above the station. The original above-ground structure is demolished, making ground for new office towers and Madison Square Garden, while the below-ground structure remains as a station.

1971 - Amtrak begins service at Penn as it takes over then-bankrupt Penn Central Railroad.

1976 - Conrail takes over other bankrupt carriers, including the LVRR service into Penn.

1983 - NJ Transit assumes operation of all NJ commuter service from Contrail, with its Newark Division terminating at Penn Station.

2011 - Gateway Project is announced. Once completed in 2024, it would double the train capacity across the Hudson into Penn Station. 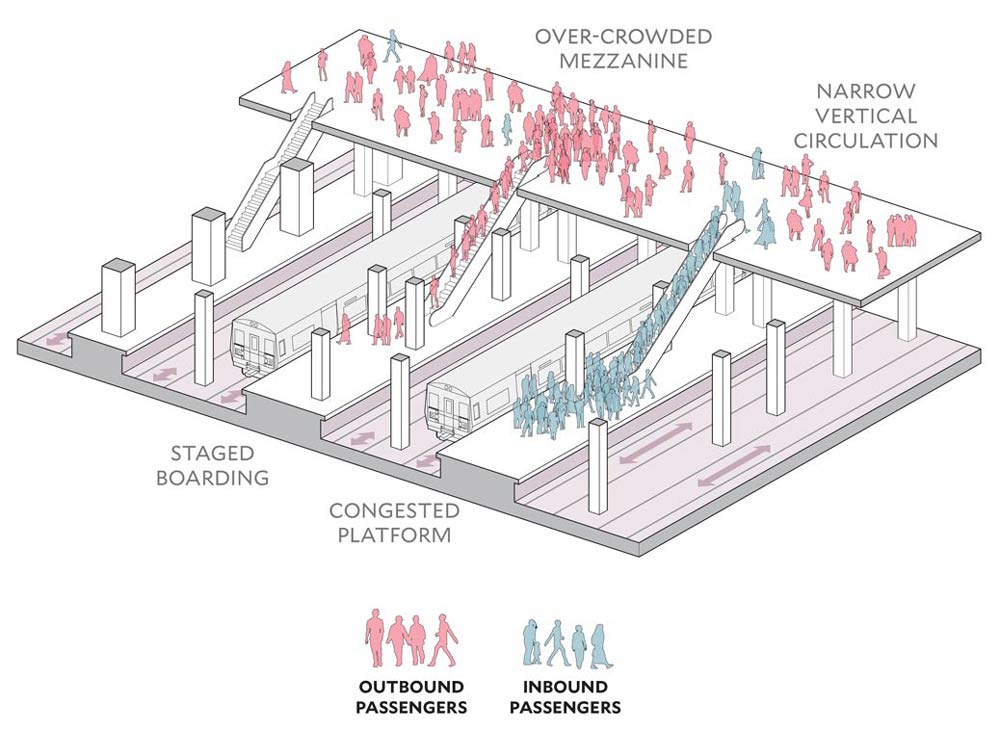 1. Penn Station is unpleasant for passengers.

Penn Station has notoriously narrow platforms, with limited stair and escalator access. This bottleneck creates severe and dangerous overcrowding on both the platforms and concourses. 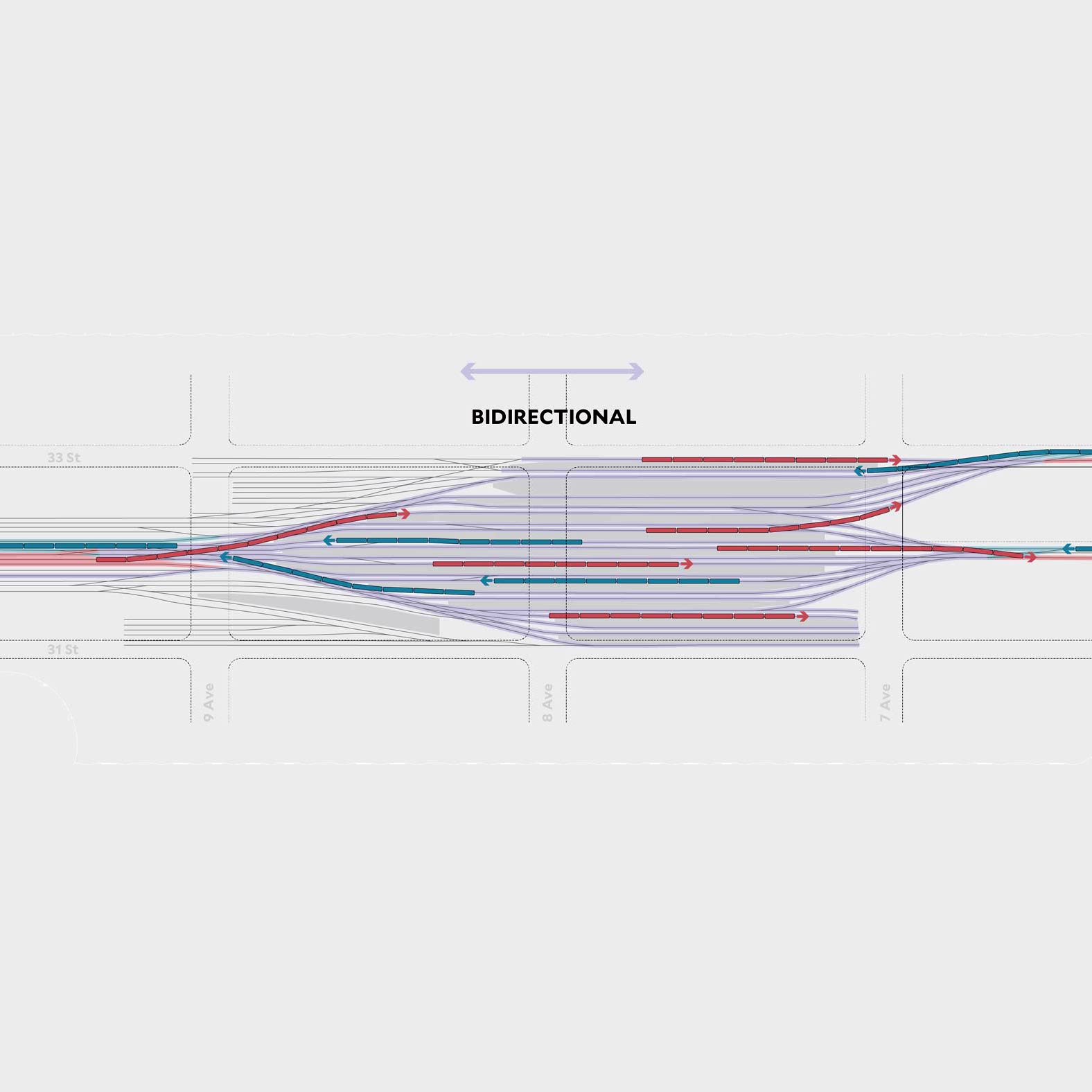 By using Penn Station as a terminal, trains have to cut across each other and end up stuck in the tunnels and by the platforms. Far fewer trains can access the station every hour than is theoretically achievable. 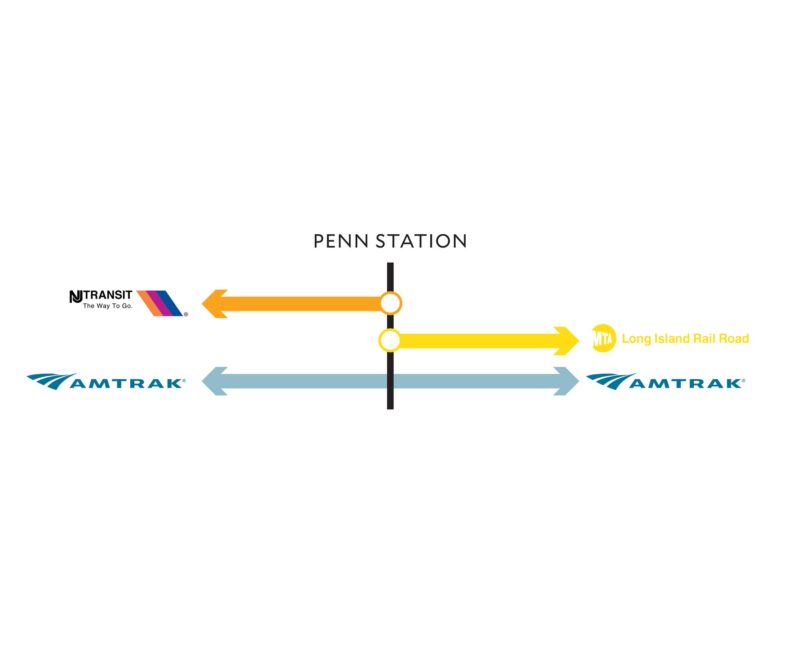 3. Penn Station is a set of disconnected terminals, rather than part of a regional network.

Penn Station is the last stop on the line for all New Jersey Transit and Long Island Railroad passengers. Commuters have no direct or simple route between points on the West and East of Penn Station. 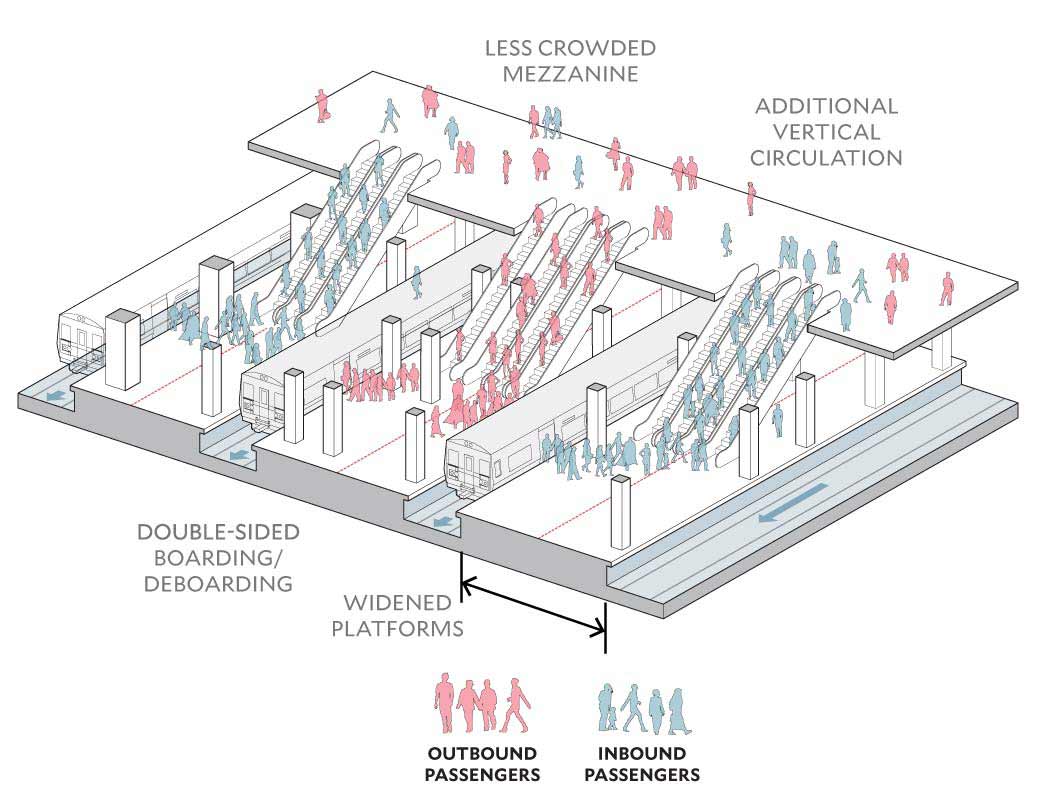 Trains could load and unload from both sides on 12 tracks. We double the width of the platforms and more than triple the number of stairs and escalators, and make it possible for everyone to access the new Moynihan Station. 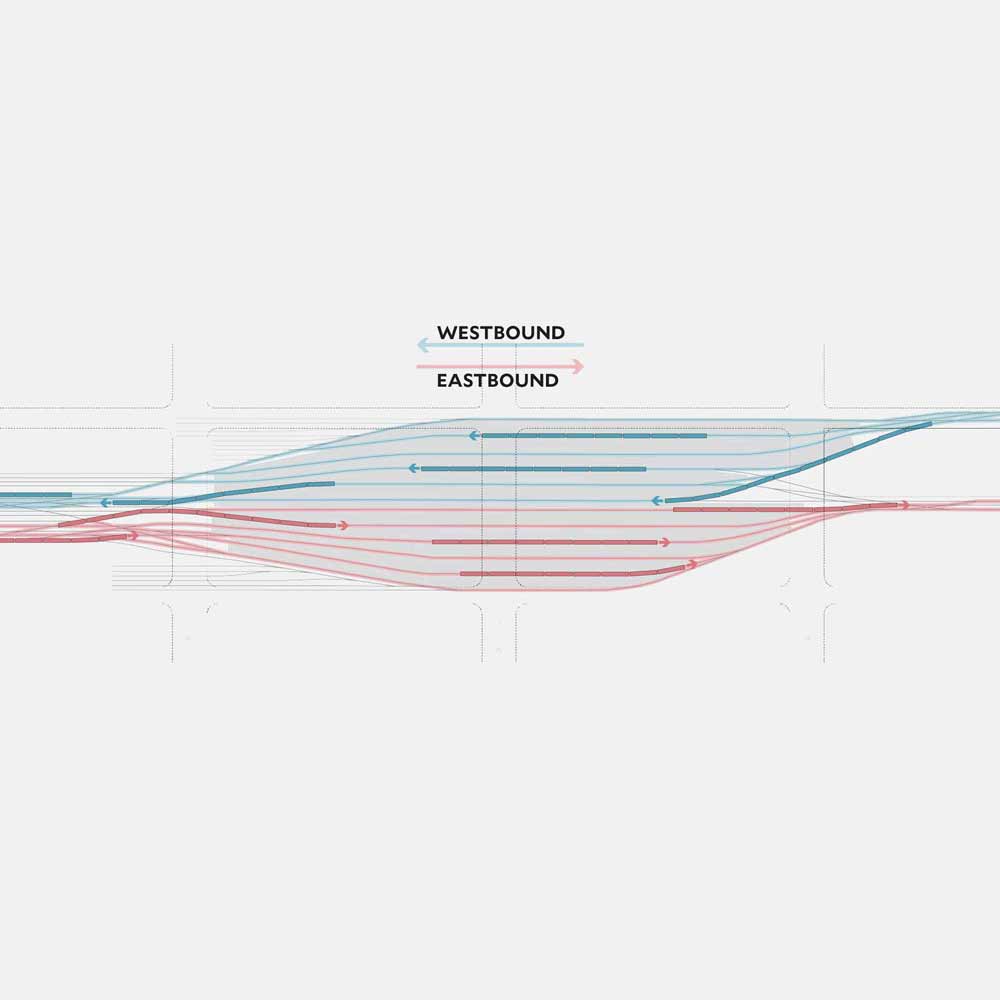 By running trains through Penn Station, RUN eliminates the need for trains moving in opposite directions to cut in front of each other. The smooth, symmetrical flow of traffic allows far more trains to use the station. 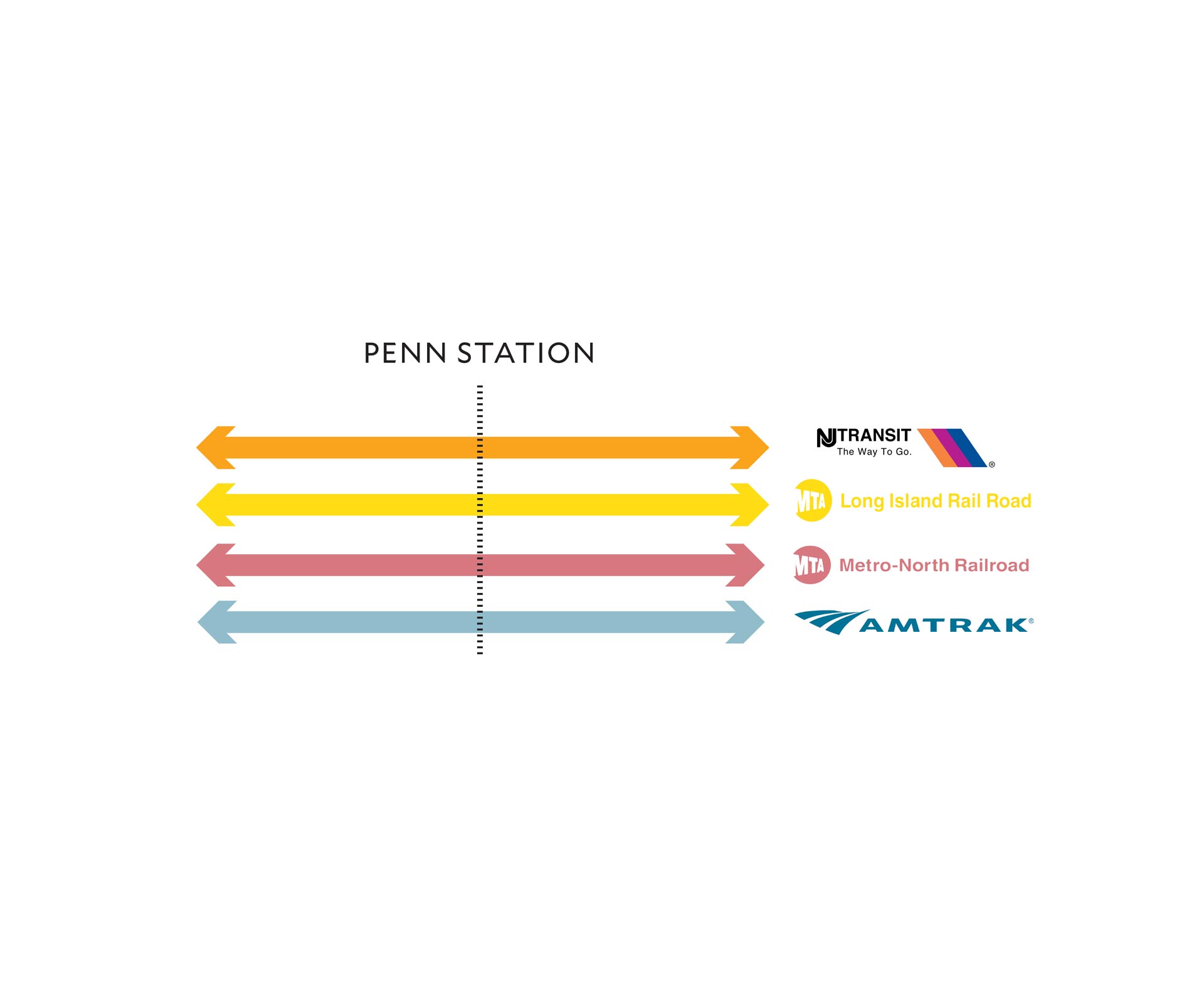 3. Through station on a regional network — not a terminal.

Running all regional rail lines through Penn Station alleviates congestion and provides a range of destinations.

ReThinkNYC’s proposal fixes Penn Station at the platform and track level and, by speeding passenger movement onto and off of trains, improves conditions on Penn Station’s cramped concourses. Because the plan does not alter the architectural support systems of the buildings above the concourse, it is compatible with any plan to change, or retain, the current Penn Station,
as well as with any proposals for the entire Farley Post Office Building. 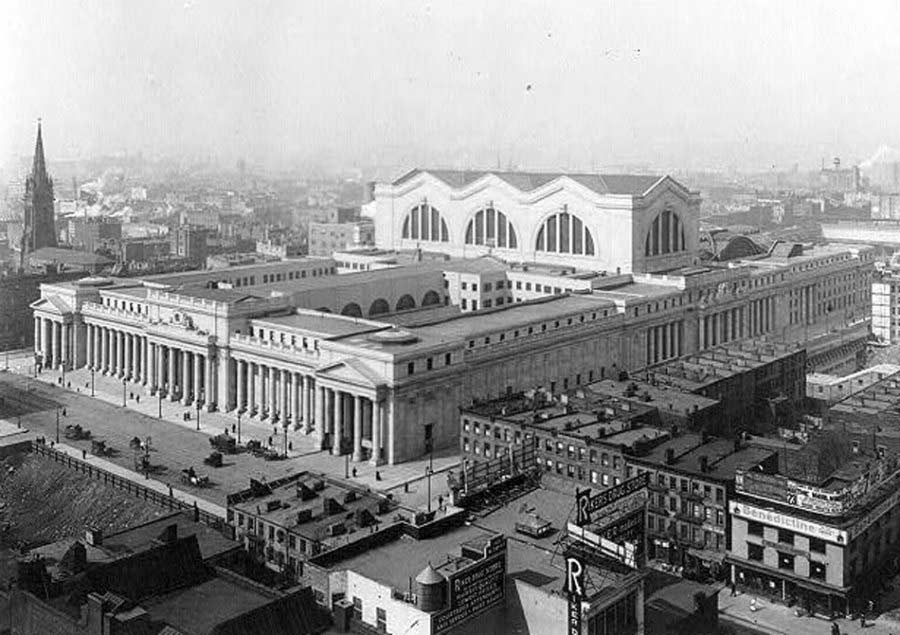 The original Penn Station in 1911, shortly after opening.

ReThinkNYC supports efforts to turn Penn Station into a grand civic entryway in which New Yorkers can take pride in, and believes a new proposal should be paired with Phase 1 of RUN to fix Penn Station from the ground up all at once. Such an approach may also be easier from an engineering and construction perspective. Fixing the tracks and platforms makes it even more desirable to build something worthwhile at the street and concourse levels.